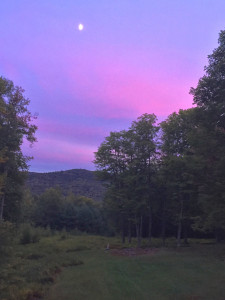 Like many my age, and especially my generation—my g-g-generation— I have hearing loss. My ears literally, “whisper the sound of silence.” And to add insult to injury, as I was first writing this, longhand, my pen started to run dry. The words got fainter and fainter as I pressed on. Not funny, universe.

What’s on my mind is the quality of sound when I’m in Vermont, as I was last month. People talk about a passing car being an event. Some, being so unaccustomed to the silence, are actually frightened by the absence of noise. But my fear is not being able to hear the silence.

What passes for silence for me now is a constant buzzing hum, especially in my left ear, thanks to a friend’s very loud band one singular night about ten years ago. Leaving, I thought the sprinklers were on outside the club. Nope. Just my ears.

The old adage of the frog in the cook pot comes to mind. As my hearing gradually gets more compromised, I am only occasionally aware. Because the rate is slow (like the increase in temperature around the frog) I am not aware of what I am losing. And I have nothing with which to compare my hearing at any one moment. I just notice the cicadas that are not cicadas singing away in both ears. Once in a while, like now when I notice the wind is blowing but I hear no sound of moving leaves, I realize that there is something I’m missing. Or like when I’m out for a walk with my wife and she asks me, “Do you hear that?” Always a hard question to answer. I have to scan what passes as silence and seen if there’s anything noticeable about the background hum. Depending on the frequency, of course, there may be. But usually not. Sometimes this amazes her. “You can’t hear that?” (Whatever it is.) Nope. Sorry.

Yes, I am a musician, and yes, I played too loud for too long, probably listened too loud as well, and this is those chickens coming home to roost. But I continue to play, although at much lower volume. I think.

I remember the day I first noticed “floaters” in my vision. Maybe I had always had them. Maybe one day they just appeared, the way an ache in certain joints just seems to be there one day, for no particular reason that you can fathom. All of this, I know, is aging. Being part of a generation that once mocked “anyone over thirty” as hopelessly old and out of touch, there is an ironic payback here. I don’t believe I openly mocked anyone, but I, like most people I imagine, never could grasp what getting old would feel like.

In my head, of course, I’m still a young man. I read recently that once we reach a certain age, a certain stage of development, we don’t really change that much in personality, in the way we feel, think, or react. I know brain science has trumpeted the plasticity of the brain in recent years, dooming the old dog and his new tricks to the scrap heap. All good. I will do some brain training online after this, I promise. But meanwhile, I sit here in California, midafternoon, in brilliant sunshine, hearing the sounds of the peepers in the twilight of New England in my ears. At least that’s how I choose to think of it right now.