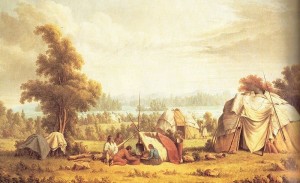 The Chippewa song, Noise of the Village, reads, simply, “Whenever I pause, the noise of the village.” The context, understood by the intended audience, is the point of view of someone walking on foot on trails on a hillside above the settlement of his people. That context, missing for us, was immediately accessible to whoever heard or sang that song, centuries ago. The song/poem is a sort of haiku, American-style, which influenced many poets of the late 60s.

It’s common for us to feel marginalized by songs, poems— literature in general— of other cultures. It’s good for us of the dominant culture, I think, to feel we missed a handout somewhere. We are accustomed to having our literature pre-digested for us. We expect it to be easy.

In celebration of Indigenous Peoples’ Day, more commonly Columbus Day, then, I acknowledge the People who came before us here, and who gave the world here its first words. Even the Spanish city and street names here in my neighborhood are a secondary layer of language history. I accept the fact that there is much I will never get, never understand, no matter what. Heck, it’s true of Shakespeare, too. Celebrate.

That said, I also felt on that particular evening that I shared the experience the song describes, in a very contemporary, personal and authentic way. I was walking my dog in the late heat of the October day on the open space behind my “village.” The view going up the hill is grand. I can see the maze of gently curving suburban streets below me, the fire station just now springing to life with sirens and swirling red lights. Beyond that, Highway 101 going north/south as always, a river of traffic that never rests. And beyond that more streets of a business park, the canals of Bel Marin Keys, and finally, serene in the still and heat, the Bay—San Pablo Bay, the forehead of San Francisco Bay. As I turn to survey all that, and as my dog notices and decides she can explore the surrounding grassland, I hear the sound of the village. 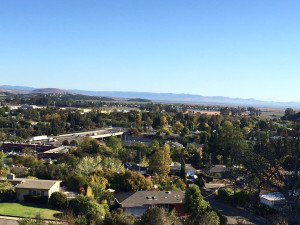 I also imagine from my sentimental perspective that the village sounds the song commemorates were richer, more aesthetic. They were human sounds of a purer nature: children laughing, women grinding by hand a pestle of wild wheat with a stone mortar. A pair of dogs barking. A baby crying. Human, except for the dogs. My village is the traffic.

I was going to say that my village was silenced by the traffic, and that is true, I suppose. But these days we do our living, our work and play, inside thicker walls, walls which conceal our joy and our boredom, our pleasure and our pain. No, the noise from the freeway is legitimately ours, is us, is our village. If, in a few centuries, someone were to study today’s American culture, the car would certainly be a star player.

And this evening, as I pause on the hill overlooking the village, for better or worse, it speaks for us.

Posted in Copywriting, Uncategorized
← The Sound of SilenceVirtual Wilderness? →